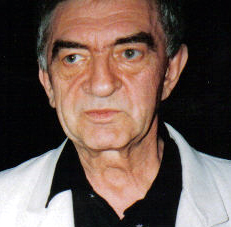 ” There was something repelling and ridiculous in that strange figure. He wasn’t old: there was barely a touch of white showing in his thick tousled hair and unkempt, tangled beard. His belly was caved in and hollow, and his narrow shoulders hunched forward in a permanent crafty stoop, so that at first sight he looked like a hunchback. Over his unnatural profusion wobbled a huge head with curiously piercing eyes set in a sly fox face, which also showed the gleeful mischief of a monkey. Scarlet boils erupted all over his yellow skin, and his nose glowed in its own crimson affirmation of his love for the bottle. ”

During the communist era, he was a deputy in the Sejm.